We are investigating the effects of electrical discharges on the characteristics of laminar flames in various conditions to understand fundamental physicochemical mechanism behind. 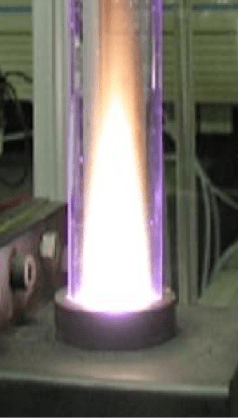 The effect of non-thermal plasma on diffusion flames in a coflow jet has been studied experimentally by adopting a dielectric barrier discharge (DBD) technique. The plasma reactor had wire-cylinder type electrodes with AC power supply operated at 400 Hz. The effect of flame on electrical discharge behavior was first investigated to identify the regime of plasma generation, discharge onset voltage, and delivered power to the plasma reactor. The generation of streamers was enhanced with a flame due to increased reduced electric fields by high temperature burnt gas and the abundance of ions in the flame region. The effect of streamers on flame behavior reveals that the flame length was significantly decreased as the applied voltage increased. The yellow luminosity by the radiation of soot particles was also significantly reduced. The temperature of burnt gases, the concentrations of major species, and the spatial distribution of OH radical, PAH, and soot have been measured. The formation of PAH and soot was influenced appreciably by the non-thermal plasma, while the flame temperature and the concentration of major species were not influenced much with the plasma generation. The results demonstrated that the application of non-thermal plasmas can be a viable technique in controlling soot generation in flames with low power consumption in the order of 1 W. 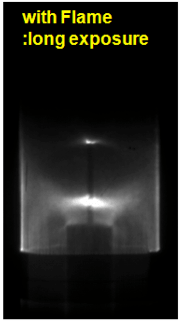 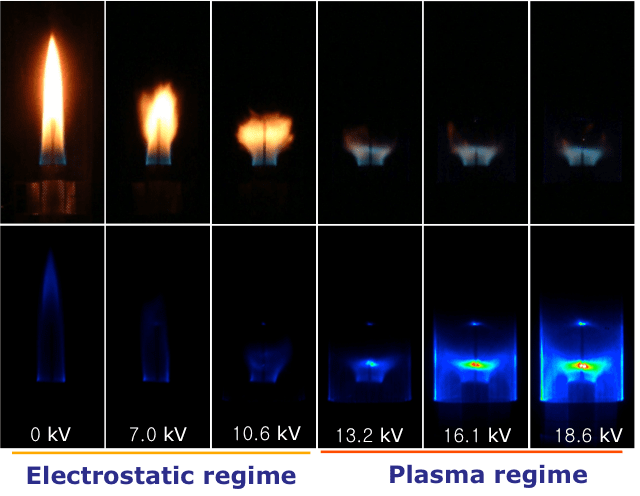 Ozone (O3) is known as one of the strongest oxidizers and therefore is widely used in many applications. Typically in the combustion field, a combination of non-thermal plasma and combustion systems have been studied focusing on the effects of ozone on flame propagation speeds and ignition characteristics. Here, we experimentally investigated the effects of ozone on blowoff of premixed methane/air and propane/air flames over a full range of equivalence ratios at room temperature and atmospheric pressure by using a co-flow burner and a dielectric barrier discharge. The results with ozone showed that a nozzle exit jet velocity at the moment of flame blowoff (blowoff velocity) significantly increased, and flammability limits for both fuel-lean and rich mixtures were also extended. Ozone had stronger effects of percent enhancement in the blowoff velocity for off-stoichiometric mixtures, while minimum enhancements could be observed around stoichiometric conditions for both fuels showing linear positive dependence on a tested range of ozone concentration up to 3810 ppm. Through chemical kinetic simulations, the experimentally observed trends of the enhancement in blowoff velocity were identified as a result of the modification of the laminar burning velocity. Two ozone decomposition pathways of O3 + N2 ® O + O2 + N2 and O3 + H ® O2 + OH were identified as the most controlling steps. These reactions, coupled with fuel consumption characteristics of each fuel determined the degree of promotion in laminar burning velocities, supporting experimental observations on blowoff velocities with ozone addition. 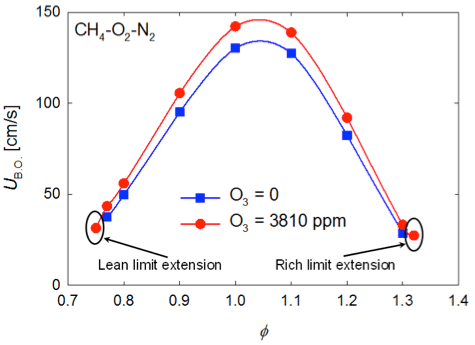 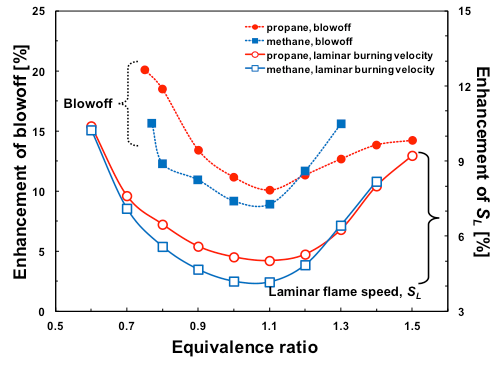